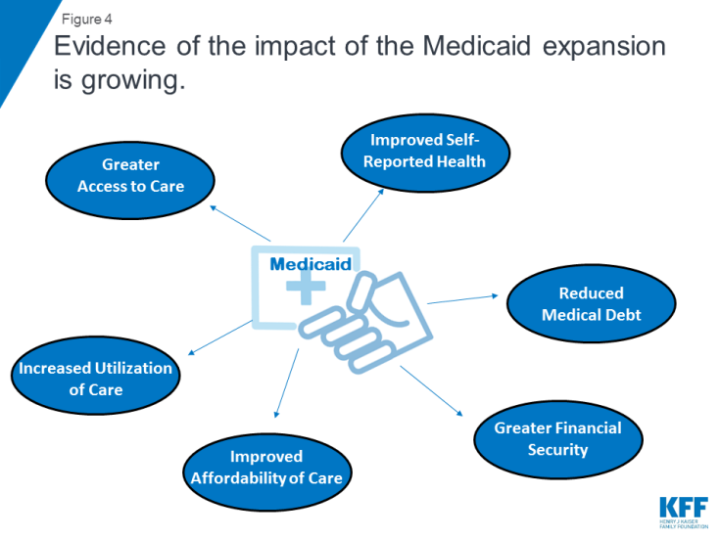 Medicaid is a public insurance program for low-income individuals implemented by the Centers for Medicare and Medicaid (CMS). It covers 1 in 5 Americans–the most recent data from CMS reports 67.4 million individuals are currently enrolled–many with complex and expensive health care needs, the majority of whom lack alternative options for affordable health insurance. The program is statutorily governed by Title XIX of the Social Security Act and an extensive collection of regulations. In 2016, Medicaid spending was 17% of total national health expenditures–$565.5 billion out of $3.3 trillion.

Medicaid was created as a state-federal partnership, which is expressed in the benefit structure [mandatory benefits for all beneficiaries and optional benefits that can be added by each state] and in the program’s financing. The federal government pays states a percentage of Medicaid expenditures called the Federal Medical Assistance Percentage (FMAP). When Medicaid was established in 1965, Congress gave the Secretary of HHS the authority to withhold all or some of a state’s FMAP to enforce compliance with program rules.

The ACA made two major changes to the Medicaid program. First, it significantly altered the eligibility criteria to ensure that any individual without coverage through another means (Medicare, employer-sponsored, VA, etc.) would have access to affordable insurance. And second, it offered states a fantastic financial deal–the federal government would cover a decreasing percentage of the cost of the expanded enrollees ranging from 100% in 2014-2016 down to 90% in 2020 and beyond. [In 2012, FMAP rates ranged from 50% to 74%. The increased FMAP in the ACA applied to expansion beneficiaries].

Prior to the ACA, an individual was eligible for Medicaid if they met all five of the following criteria:

(1) Defined by one or more of the following categories: pregnant women, children, individuals with disabilities, elderly; parent with child in the home;
(2) Income threshold: Varies by state, but typically 100% of the federal poverty level (FPL);
(3) Resources: Items like cars and homes must be valued under a certain amount, usually between $1,000-$3,000;
(4) Residency in the state one is applying for Medicaid;
(5) Legal resident of the U.S.

The ACA changed the formula to determine Medicaid eligibility–only one criteria must be met to be eligible:

The ACA required states to expand Medicaid to the population indicated above or risk losing all of their matching funds for Medicaid from the federal government. It was this aspect of the Medicaid expansion that most angered some states, leading to a constitutional challenge of the expansion by 26 states. This legal action questioned the power balance between the federal and state governments–the 10th amendment to the U.S. Constitution grants state governments all powers not enumerated to the federal government. If Congress oversteps the 10th Amendment, the U.S. Supreme Court can find the law unconstitutional.

The Supreme Court had previously held that Congress can assign stipulations to federal funds its disburses to states in accordance with the Spending Clause, which allows Congress to spend “for the general Welfare of the United States.” For example, all states receive their FMAP on the condition that they provide all of the regulated mandatory Medicaid benefits to all eligible enrollees. But in this case, the requirement that states expand their Medicaid program in accordance with the ACA or risk losing all federal matching funds for Medicaid was found to be a coercive action and beyond the scope of federal power.

While the Supreme Court opinion ruled that it was unconstitutional to require all states to expand Medicaid, it did not prohibit states from choosing to expand Medicaid and accept the increased FMAP. States that expanded Medicaid have seen large increases in enrollment, primarily driven by enrollment of newly eligible individuals. As of June 1, 2018, 34 states (including D.C.) have expanded Medicaid; 3 states are considering adopting the expansion; and 14 states are not expanding at this time.

Explore the complicated Supreme Court decision on Medicaid expansion starting on page 4 of this KFF Focus on Health Reform brief.

One thought on “The Medicaid Expansion Essentials”