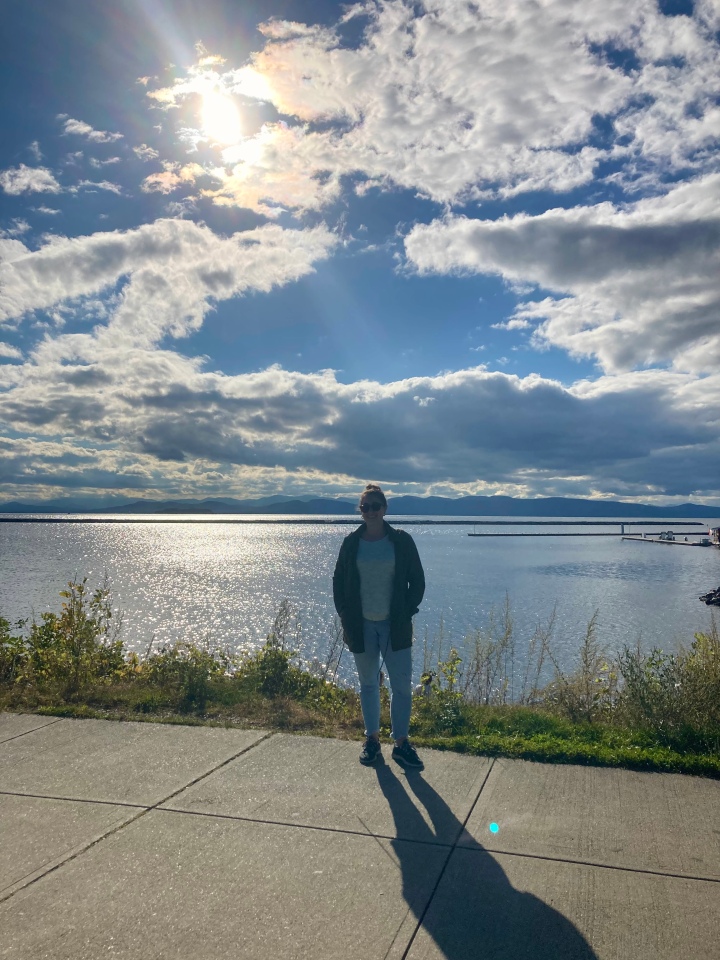 It’s October in Florida, which means…absolutely nothing. It’s still 80 degrees outside with punishing humidity at 7 a.m., which means I’m sweating on my less than 5 minute walk to the train. Cue the incessant scrolling of pictures from my recent trip to Vermont for REAL FALL. It’s been more than a few years since I’ve lived somewhere with four true seasons, so the leaf colors, apple picking, and crisp air were a delight. It was so hard to leave, especially knowing I was coming back to the heat and humidity, but mostly because I had a great week visiting a good friend.

I landed in Burlington in the early afternoon on the most clear day and my friend took me on a walking tour of town. Burlington is home to the University of Vermont and is situated right on Lake Champlain (you can wave hello to New York!). The downtown has blocks of stores and restaurants on a pedestrian only street and so many cute shops! I obviously had to pop into the bookstore, but somehow refrained from grabbing anything. After some window shopping, we went on a walk that included a stop for apple cider gelato (!!) at Shy Guy Gelato. I’ve only been thinking about it once a day since I got home…

My friend lives in Montpelier, which is the capital of Vermont. It’s quite possibly the cutest state capital I’ve been to…sorry not sorry Tallahassee. I had the chance to explore the downtown, visit the state capitol building, and could have lived at the local co-op. Can we get one in Miami please!?I spent one morning at the Vermont History Museum and learned so much about how Vermont became a state, the Abenaki indigenous tribe, and their industrial and tourism history. I am a complete history nerd, so suffice to say, I spent far more time here than the average person.

I also highly recommend stopping for pastries at Bohemian Bakery, popping into Bear Pond Books for a few new books, and picking up a cross stitch kit at Notion Fabric & Craft. If you’re in Montpelier on a Sunday between May and October, be sure to stop at the Montpelier Farmer’s Market for fresh pasta and Italian doughnuts from Trenchers Farmhouse and some incredible fresh produce, cheese, and bread.

We also explored Stowe, which was packed with tourists doing some fall foliage sightseeing (aka “leaf peeping). It is *the* quintessential Vermont town that would be featured in a Hallmark movie. [And yes, the title of this post, Falling for Vermont, might also be the title of a Hallmark movie…]. We stopped at Black Cap Coffee and then went for a nice walk on the recreation path. Earlier in the week, we went to a pumpkin chuckin’ event (yes, seriously, people built catapults and competed to see who could launch a pumpkin the farthest) and made the excellent decision to stop at Stowe Cider. I usually find cider to be too sweet, but they had so many flavors, mostly on the dry side. My favorite was the grapefruit cider – and the cheese plate, obviously! And if you like wine, be sure to stop at Dedalus Wine Shop. They have a wide variety and snacks to go along with it, plus tastings.

The hike to the summit of Stowe Pinnacle was challenging (there are no hills in Florida…) but so worth it. The day was a bit cloudy but that didn’t impact the views one bit. Before the hike, we stopped at Vermont Artisan for coffee and pastries – we devoured the leftovers after the hike. The coffee shop is in a big red barn that screams Vermont! I also couldn’t leave without going to an apple orchard for some fresh honey crisps and cider donuts!

I’ve been collecting koozies since college and never pass up the opportunity to visit a brewery to grab a new one. There are over 50 breweries in Vermont and most of them participate in the Brewery Challenge, a paper passport (or app!) that you can get stamped when you visit each brewery. The passport can then be mailed in and the stamps will earn you prizes. I didn’t visit enough to earn a prize on this trip, so I obviously need to go back and work on it! Here’s the progress I made:

I’m already planning my next trip, maybe this time for some snow and skiing, plus a few more brewery stamps on my passport!